“Five For Friday” with Mike Pougounas of New Zero God 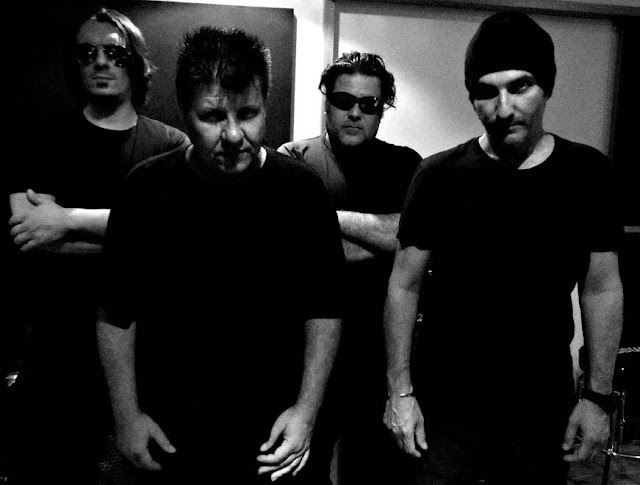 New Zero God is a Post Punk/Goth band founded in 2006 by former members of The Flowers Of Romance. Their latest album “Short Tales & Tall Shadows” takes you into a world of light and darkness where Gothic elements merge into a psychedelic mood and draws the listener into a sound of theatricality. Vocalist/Keyboardist Mike Pougounas shares some of his favorite songs in this weeks edition of “Five For Friday” but first enjoy the video for their latest single “Garden Of Mazes”.

This was my first 7” single. I had the pleasure of meeting their drummer, David Ruffy, a few years ago. “In A Rut / H Eyes”. A single I still own. The Ruts remain an all time favorite and I was happy that Henry Rollins joined them that night on July 16 2007. Everyone should watch the video of that night

By the late 70’s a friend of mine went to London for studies. He worked for some clubs and when he came back next year he brought a great number of cassettes that he recorded by jacking a tape recorder to the soundboard. XTC, Blondie, Police, Nazareth and many more. But, the ones I loved most were The Psychedelic Furs. They didn’t have an album yet so I called the top radio dj of the country on the phone during his show to ask for a song of theirs. “The Psyche…what?” I was having great laughs with “Mr Know Everything”… After a couple of years Psychedelic Furs became big… I was in my post-punk phase.

When Lords of the New Church released their first album I was flabbergasted. The band had everything: Stiv Bators (The Dead Boys), Brian James (The Damned), Dave Tregunna (Sham 69) and Nick Turner (The Barracudas). The sound wasn’t punk anymore. Within a year or two, the sound of my band, The Flowers of Romance turned into gothic rock.

In the mid 90’s I bought this Die Krupps album. They sent some of their tracks to other musicians in order to remix them. They came up with a double album. “Fatherland” which was remixed by the Sisters of Mercy. Nine Inch Nails were around the corner too. There was something happening in music. I came up with an industrial track called “Channel Z” for the new Flowers of Romance album and had long discussions with my producer, Wayne Hussey, formerly guitarist of The Sisters of Mercy and then leader of The Mission UK. “Channel Z” went to #5 and two years later I decided to make an industrial goth band called Nexus. I formed my own record label and released four albums of mine and eight more by other artists.

By the mid 00’s my growing interest about the English post punk scene of the late 70’s took over again. There were thousands of tracks that I didn’t have the chance to find before but now, thanks to the internet, I could!!! I started listening to “old” stuff again. I was discovering bands that released a couple of singles and that was all for them… I rediscovered punk rock. DIY all the way baby! I closed my record label, put Nexus on hold and formed New Zero God with the intention to play post punk? Goth? Who cares? Southern Death Cult was one of my biggest influences when I was a kid. So I decided to return to that sound…