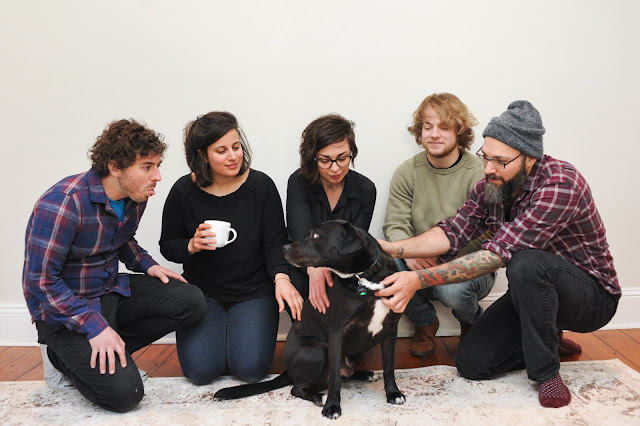 Bethlehem Pennsylvania’s VoirVoir have been a cornerstone of the Lehigh Valley music scene since forming in 2012. Their uplifting, indie rock sound is captured on their latest release “There Are No Good Goodbyes” available now from Fleeting Youth Records (fleetingyouthrecords.com). Band members Matt Juknevic, Josh Maskornick, Felicia Vee, April Smith and Matt Molchany share some of their favorite songs in this weeks edition of “Five For Friday” but first listen to the bands song “I Wanna”.

Matty: The Band – ” It Makes No Difference”

I love this song just because it’s so incredibly touching and sad and you can just feel the raw emotion in the music as well as Rick Danko’s vocal. It just breaks my heart and I love it. Ive played this song a couple of times live and I remember it being hard to sing and getting a bit choked up because of the heaviness in the words.

The lyrics of this song instantly play like a movie clip through my head every time I hear it. The story flows in beautiful harmonies, complimented by poetic accents of guitar. It’s hard to imagine where one will end up in the twilight moments of life. This song reminds us that relationships and the memories they create stay with us during this journey, regardless of time or place. After a life full of experiences, successes and failures, partnerships and times of solitude, friends can reminisce on the stories that make up their past. Memories are the only things that will never leave us, and we should cherish them as long as we can.

I love this song not only for its catchy hook, relatable lyrics and perfect delivery, but also because I have a major soft spot for Cayetana– At a show that we played together a few years ago, one of them off-handedly said something to my band mate that turned out to be the catalyst for what would become one of the most important things in both of our lives. (Thank you.)

This piece has a way of highlighting not just one, but many points of my life….. It takes me back to the smell of spray paint, alone on a ladder, drunk and pretending to be an artist while my friends were hanging at the bar……a time when everything felt unsure. Next, it reminds me of dancing in my living room, embarrassed even though I know my dogs were the only ones watching……a time when I was just starting to be OK with myself. And about a month ago, it was part of my memory packing up our van while I was trying to figure it out on a piano where half the keys don’t work, and I couldn’t get it right, and I didn’t care. Most songs elicit just one specific memory or period of my life….but this piece of this song literally feels like it never stops giving…..it’s as timeless as it gets.

I can hear him hanging by a thread to anything that feels good, knowing it will probably go away soon, and feeling like it’s inevitably his own doing. The beauty Elliot Smith created while fighting his depression is so massive and broad that I think anyone can relate in some significant way, and that he was able to create it with how he felt is completely inspiring. Sometimes I don’t have a choice but to listen to this song and his music.